Space travel is one of the most inspiring advancements we’ve made in our short time on Earth, and it is a fascinating topic to learn about no matter your age. Let’s take a look at some of the most important events, players, and accomplishments in the history of space travel.

Most of us recognize the name Neil Armstrong, and this is because he was the first person to land on the moon in 1969 when he and Buzz Aldrin finally bested the Soviet Union in the race to space.

Luna 2 was the first human-made object to hit the moon, a feat accomplished by the Soviet Union in 1959. The first manned spacecraft to orbit our moon was Apollo 8, which came within 70 miles of the moon’s surface. The first space walk was performed by U.S.S.R astronaut Aleksei Leonov in 1965 as well, and Valentina Tereshkova was the first woman in space in 1963.

Our first views of Venus, Mars, and Mercury were brought to us by NASA-launched space probes in the 60s and 70s as well. NASA also landed two probes on Mars through Project Viking to study the Martian surface environment, its chemistry, and the presence of microorganisms. 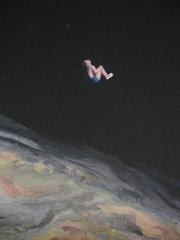 NASA was established in 1958 and was the first consolidation of space exploration activities in the United States. NASA stands for the National Aeronautics and Space Administration. NASA is a combined force of space agencies including the National Advisory Committee for Aeronautics as well as military and research facilities including the Army Ballistic Missile Agency.

The first Space Station was named the Soviet Salyut 1 station which reached Earth’s orbit in 1971. NASA followed closely behind with the launch of the Skylab Space Station, the first to allow research and study the effects of spaceflight on the human body, along with studying our Earth in the process.

The International Space Station was launched in 1998 and has been continuously occupied since 2000. It took 10 years and more than 30 missions to assemble and was the first true collaboration between international space agencies from more than a dozen countries.

In 1990, the Hubble Space Telescope was the first of its kind to orbit Earth and is instrumental in our understanding of the cosmos. The Hubble telescope revolution astronomy with the first high-resolution photos of space. This telescope also plays a big role in NASA’s ability to observe space walks and shuttles.

The first space tourist (i.e., first paying passenger) was a millionaire by the name of Dennis Tito, and he was the inspiration for the huge surge of commercialization of space tourism that we’ve seen in recent years. The total cost for the 8-day trip in 2001 was $20 million.

The Mars rover landing occurred on August 6th, 2012. The Rover’s name was Curiosity, and it was sent to determine whether life existed on mars or ever had, analyze the Martian climate, study the geology of Mars, and prepare the planet for human exploration in the future.

As recently as 2017, astronomers have discovered 7 Earth-sized planets beyond our solar system. This planetary system has been named Trappist-1, and it is about 40 light years away from Earth. There is a strong possibility that at least three of these planets may have liquid water and a habitable atmosphere.

A Summary of Civilian Space Travel

The first civilian meant to go to space was a woman named Christa McAuliffe in 1986. She was tragically killed along with her 6 crewmates when the Challenger Space Shuttle exploded during launch. This disaster ended civilian space travel before it began because NASA did not want a repeat of the tragedy.

We know that the first space tourist took his trip in 2001 with the Russian Soyuz rocket, but what’s happened with civilian space travel since then?

Only 7 other civilians have made their way to space in the last two decades, but the space tourism industry has been ramping up excessively in recent years, largely due to Elon Musk and Jeff Bezos. The first all-civilian space flight is scheduled for September of 2021 and will enter low Earth orbit for several days. Billionaires Jeff Bezos and Richard Branson have recently travelled to space as well, marking an exciting upward trajectory for the future of space tourism.

To learn more about space travel and tourism, check out Tours in Space.

You can find out more about which cookies we are using or switch them off in settings.

This website uses cookies so that we can provide you with the best user experience possible. Cookie information is stored in your browser and performs functions such as recognising you when you return to our website and helping our team to understand which sections of the website you find most interesting and useful.

Strictly Necessary Cookie should be enabled at all times so that we can save your preferences for cookie settings.

If you disable this cookie, we will not be able to save your preferences. This means that every time you visit this website you will need to enable or disable cookies again.